So as August 26th approaches, and my fight with Icy Mike is set to begin... Frank Dux is getting a bit concerned about his lies and what might be a result of it... As I pointed out in the August 4th blog Dux has yet to answer my challenge to fight me... I mean all this drama might have started with Dux sending people to Don Roley's Lexington event and Don, Dux & Barron having a circle jerk of lies and, lying more to support each other's lies to maintain Don Roley's claim to backing me down &, Dux's lie which he has conceded to sending Black Dragon Fighting Society members (though with his own twist and more lies on the matter)... but, the e-mails started with Dux crying over me making a statement that I was so pissed at him, I was considering a flying knee to the base of the skull on his right-hand side where his skull was fractured by the MMA fighter, when Dux ran his mouth and got beat down and put in the hospital.

The last e-mails we seen from Dux, was on the Blog advertising the Icy Mike & Ninja Ron bout on Street Beefs for August 26th, are dated July 26th and end on August 3rd... So lets look at the latest series of bitching, moaning and whining from alleged "CIA Super Spook & Ninja Master" Frank W. Dux... Yes my life is so interesting, I am being cyber stalked by an self-claimed CIA hitman & ninja master that the movie Bloodsport was made about... Ain't I cool..?

Spoiler alert, Dux is chickening out of fighting me... He is making excuses because he is too chicken shit to agree and too scared to not step up... In fact, he is hiding behind Don Roley, to deflect from the subject.

Here is where I answered Dux's question... Yes, I think he is scared of me, those e-mails started with him crying about me saying "I was thinking of ending his life last October..." Fuck'em I was pissed & I have a killer instinct you wouldn't believe. Dux wants to know how I will sue him for his lies... Here I suggest we fight on Street Beefs? Dux, tried to change the subject... 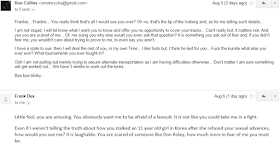 Yes... I did say, I thought Soto lied about the Kumite for Dux... Or perhaps the Picture of Dux with the Kumite Trophy is evidence he invented his own "Kumite underground martial arts tournament" to invite fighters and, justify his lies and Soto participated in those. Thus, Soto didn't lie about fighting in the Kumite and, Dux holding that trophy is a clear sign of his fabricating events to justify his story &, I owe Soto an apology. Whatever... Something for another time. Again Dux, wants to know how I would sue him... Again I ask Dux what else has he ever competed in..? What else has he won? And again I suggest we fight on Street Beefs. 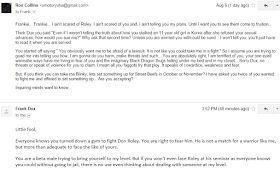 Here I casually, explain that asking the same question twice shows that he is worried about being sued, especially since he claims it is not a lie. If you are telling the truth, why ask "if I was lying what would you do?" And a 3rd Time I asked Dux to fight? I asked him if he was accepting my challenge... Frank's reply. Bull Shit... No, Dux is Championing Don Roley's Denver Gym Fight BS which happened the day after I was supposed to leave Colorado... Sorry mate, I ain't falling for the same obvious shit trap in Maryland, that, I was only in the first time saving Steven Day and the BDFS from your sabotage. The trap I predicted before I even made it to the BDFS event last year... ﻿ 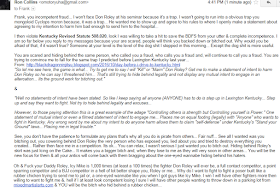 Here I get a bit, insulting with the Mongoloid Moronic One-Eyed Wannabe Wonder Dux but, Fuck'em aside from making fun of the idiot his e-mails always bring me a laugh... Especially, how serious he is taking all this compared to me... I can't name, names but there are members with the BDFS laughing their asses off at Dux... And while Dux, is trying to bait me into a trap he was stupid enough to fall for, again, with Trolly-Roley I point out, not only is Dix (yes, I intentionally spelled it to read as Dicks & not Dux) hiding behind Don Roley's skirt but, that Icy Mike is a far better challenge as a fighter then Dux or Roley. And, that if I actually look like I know what I am doing, I may have some other guys from mixedmartialarts.com's Otherground Forums, to fight...

Even if look like a complete dumb shit, a Black Dragon Ninja who will fight an MMA fighter or, any competitive fighters is novelty at least. Getting my ass beat doesn't bother me, looking like an idiot or losing doesn't bother me, know what bothers me? Not trying, letting the fear of failure stop before I have any chance at success... quitting, giving up and, listening to people too scared to attempt the things; I've decided to do... See what they hate the most about me is that, I say if I can do it so can others. No magic beans or, red badge of courage required. And, I would be a total bitch if I didn't step up to do the very thing I have been preaching about with Ninjitsu as a Competition in martial arts, strategy and tactics... I would be a Dux...
Its not about who is tougher or, more of a bad ass, it's about putting your money where your mouth is... Doing what you want to do, no more & no less. Dux is an example of those afraid to fail, they build legends around themselves and are afraid to let the light of reality into their Sand Castles of Fantasies. Jugaro Kano changed this with Judo, the Gracies changed it with the UFC, Count Dante/John Keehan changed it with Full-Contact Karate & encouraging cross training and, me well... Sand Castles are nice and pretty but, I want something to hold up to the tide...